In All You Do uses affiliate links within its posts. You may read more on our disclosure policy.

If you’re just joining me, you can catch-up on these posts.

A couple  weeks ago (yes, life has happened since then) I left you with this line: “So that was that. Nothing happened. We went back to school in January 2003 and our friendship continued. Until…”

Until what, you ask? Well until I had a bunch of the guys over to my duplex for a Super Bowl party onJanuary 26, 2003. The first thing “the boy” said to me was, “I’m an uncle again! My niece was just born!!!” He was beyond excited. And I was so happy for him too! I know how devastated he was when his first niece passed away suddenly just a year and a half before.

From what I can remember, the guys brought chips and salsa and we mostly had snack foods while playing a couple games and pausing for the commercials. We didn’t really care about the game itself, but we all loved to laugh at the commercials. Fun times!!!

After the game, the guys all left and went back to the dorms. The next day I had to work in the Learning Center most of the afternoon and evening. I had called “the boy” several times that day with no answer. He didn’t answer his cell or his room phone. I left a message, but by dinner time I still had not heard anything. I was a little hurt, because that was totally unlike him not to call me back. Even if just for a minute. But, I continued to work and tried to forget about it.

About an hour before I closed down the Learning Center, “the boy” showed up. He sat down at the table where I was and asked if he could talk to me. UH OH! Those are never good words.

The rest of the conversation went something like this:

Boy: I’ve been thinking and praying a lot today.

Me: Okay. That’s good. (You know since we were at a Bible College and all.)

Long pause (he still does this during serious conversations and it drives me absolutely nuts to this day! Haha)

Me: About anything in particular??

Boy: Yes. (another pause) We can’t be friends anymore.

Me: Umm…okay? (thinking to myself, most people just walk on the other side of the sidewalk or avoid you all together, but thanks for telling me in person.)

Boy: What I mean is, I’ve been thinking a lot. About the “M” word mostly.

Me: (Being totally sarcastic and just plain mean) Your Mom?

Me: Oh. Then what? (I totally knew what he was talking about, but wanted him to say it. hehe)

Boy: Marriage. To You.

Boy: So…I think I want to marry you.

Boy: I know I do. What do you think?
Me: I think I’ve been waiting a long time to hear you say that! Are you asking me?

And that was that. We were unofficially engaged. And I say, unofficially because he had not talked to my Dad (that’s a whole other story) nor did I have a ring.

But not to worry. Only 15 short days later I got a dozen yellow roses and his proposal was about as romantic as the other conversation. LOL

Boy: Here (handing me the vase of flowers)

Me: These are so pretty. What are they for?

Boy: Because. I love you!

Again, I was closing down theLearningCenterand we were gathering up my stack of books. I think I was working on a big paper or something.

As we’re gathering books, he says…

Boy: Here, let me get those. But you hold this (as he hands me a jewelry box).

Boy: Will you marry me??

We hugged and were so happy. I could tell he was completely relieved. Later I teased him about not kneeling on one knee (and I still do to this day – it’s a running joke now). We went out to my car and called my parents, grandparents, cousin, best friend and then went to my dorm parents, who insisted on a candle-lighting ceremony that night (more on that in a minute) and then to his dorm parents who were completely ecstatic!!

So our entire “courtship” was really non-existent unless you count the 2.5 years of friendship we had before the “proposal” conversation. Or at the very least it was 15 days if you count the time between the conversation and when I got my ring.

So what is a candle-lighting?? Well, it is a tradition in the girls’ dorms that a candle-lighting ceremony be held whenever a girl gets engaged. It is a rather fun tradition and something I will always remember. There are several ways to do it actually, but if the girl has already been proposed to she is the one that blows out the candle when it is passed to her. All the girls gather in the main lobby and our dorm Dad always read a Scripture about marriage before we started the candle around the circle. Every girl (up to the engaged one) was to touch the candle and pass it on to the next one. It was always fun to see who would blow the candle out. Mine came as a total shock to most people since we had not “been together” that long. Most people (other than my close friends) had no idea it was that serious. So it was quite fun! Then, after you blow the candle, the lights are turned back on and you get to tell your proposal story. It’s a silly, girly tradition. But so much fun too!!!!

So, that was February 11, 2003and we were married later that year on August 16th, 2003. It was nice and WARM that day, but so beautiful. Our wedding was at4:00 in the afternoon and our receptions (yes, we had two) went well into the night hours. We stayed in a local hotel that night and then went to my grandparents’ house to open the gifts brought to the wedding. Both sets of parents and all our grandparents were there to watch. It was a fun time.

There were several reasons we opened our gifts the next morning. One: The wedding day was already so full. Two: We were going straight from our honeymoon back toJoplin, where we both had to enroll in our fall semesters for college (my senior year and his middler year). And that way when my parents brought the gifts up later they were already opened and no one missed it.

It was also so nice to stay in a local hotel rather than try and drive 4 hours to our honeymoon destination after a long and exhausting day. It was the best decision we made!!

I’m going to leave you with a few pictures from our Wedding Day. 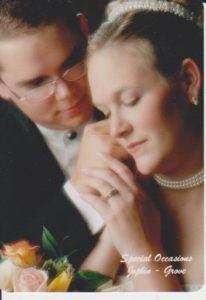 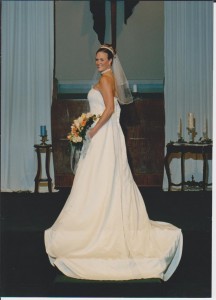 Me, The Bride – my Mom made my dress. 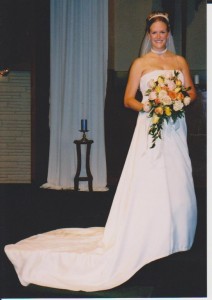 Another one of Me, The Bride

Me and my girls 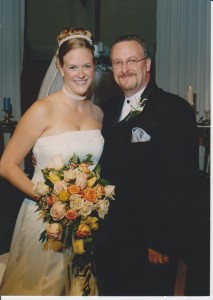 Another before wedding shot with my Daddy 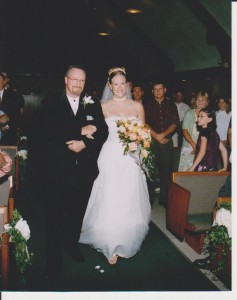 Walking down the isle with my Daddy 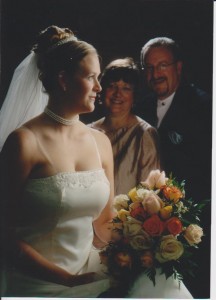 Another favorite of mine. 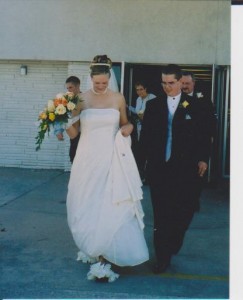 Running to the reception in my one-of-a-kind flip flops!! A friend of mine made them for me to wear across the parking lot to the reception. They were made from leftover material from my dress!! I LOVED them!! (P.S. I went barefoot during the wedding!) 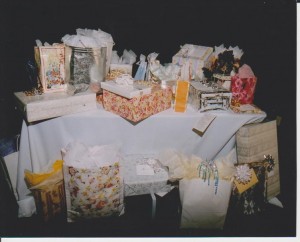 Just a glimpse of some of the gifts we opened the next day! I just think this shot is so pretty!!

I am wrote this series in hopes that some of the experiences and situations I have encountered during my life will give hope and healing to those who are hurting.

A Wise Woman Builds Her Home

« Weekly Homeschool Wrap-up: Summer weather is coming to an end
The Battle Belongs to the LORD » 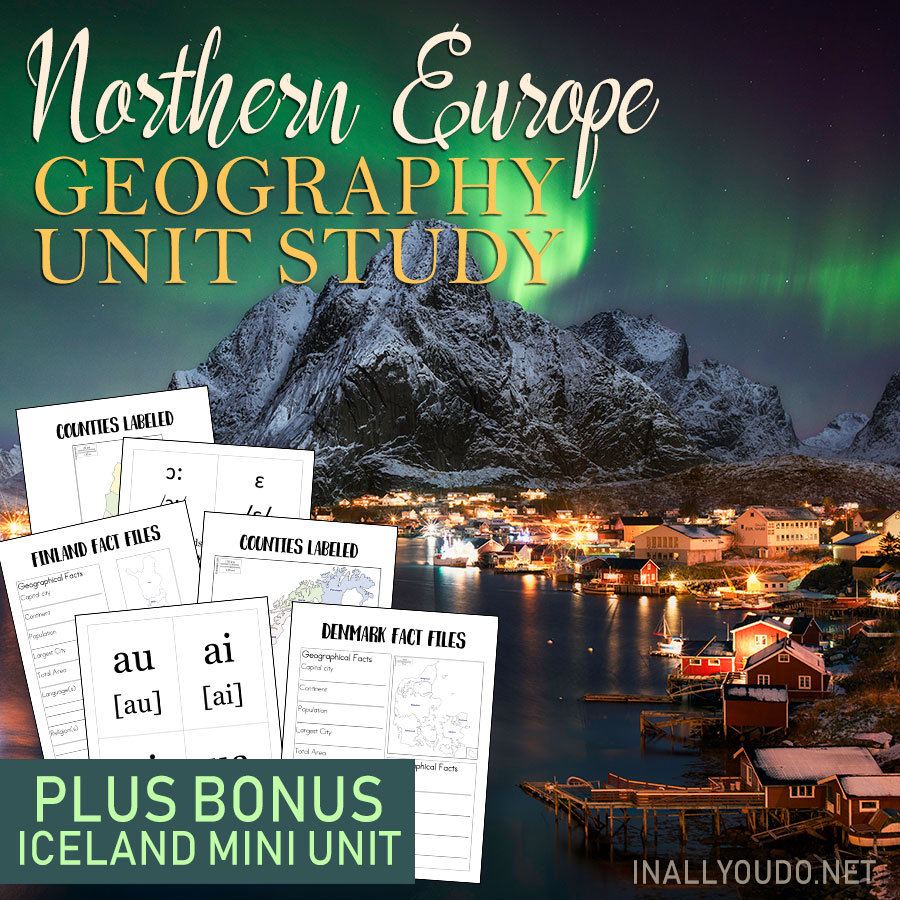 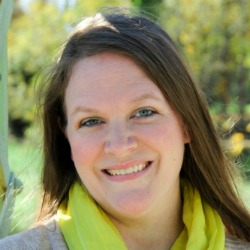 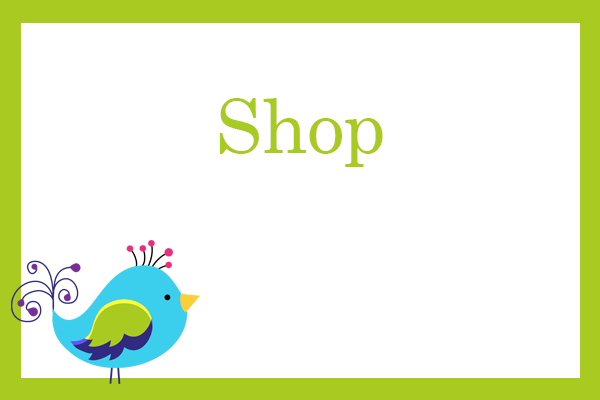